Oral-Motor Issues in Kids with Down Syndrome 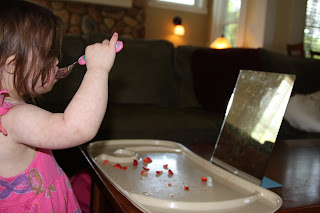 When Bridget was born and diagnosed with Down syndrome, Chris and I wondered how raising her would be different than parenting our other kids.

Like most other parents of children with Ds, as we learned about the condition, we heard about the challenges that often come with a diagnosis of Down syndrome. We had to sort through the many health and developmental issues that are common in people with Ds and figure out what applied to Bridget, and therefore to us.

I'm not an expert, but it seems like children with major medical issues are often more delayed in reaching milestones than kids who do not have health challenges (any child, not just kids with Ds). Kids with Down syndrome who also have major health challenges are often significantly delayed in reaching milestones of all kinds. Though once those health issues resolve (after heart surgery, for example, or after vision and hearing issues are addressed), the child often begins to make up for lost time and begins to "catch up".

Bridget has always been very healthy. She had a very small atrial septal defect (ASD), but it did not cause problems for her and had closed by the time she turned one year old.

She had surgery the day she was born (to correct a relatively minor abdominal wall malformation) and was born prematurely (at 34 weeks). She recovered quickly from the surgery, but was still having occasional "Brady's"--brief episodes when her heart rate would drop--a common issue in preemies. And, as soon as she was able to begin eating by mouth (when she was about a week old), it became clear to us that her swallow was not fully developed. She stayed in the hospital for nearly a month, where she could be in a safe, monitored environment until the random dropping heart-rates resolved and swallowing issues improved.

Helping Bridget learn to eat by mouth was our first major challenge, and over time we learned that feeding issues would be one of our two biggest hurdles in the first several years of life with Bridget. A related oral-motor skill, speech, would prove to be the other.

Since feeding and speech concerns are often related, and are both common in kids with Down syndrome, my next several posts will cover these issues in depth.

Speech-Language Pathologist Sara Rosenfeld Johnson's blog, Sara's Feeding and Speech Thoughts, is a great resource for parents looking for information on these topics.