If you look closely at the picture below, you can see that there are six stickers on Bridget's potty, which means that she has successfully used the potty as man 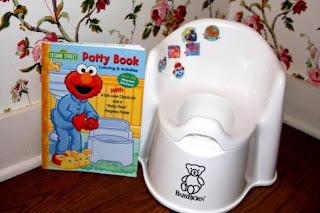 We are not officially potty training yet, but I thought I would start experimenting with Bridget. She started taking off wet diapers on her own awhile ago. She kept wanting to put them on the kitchen counter, so I make sure she is always wearing a diaper cover of some sort.

When she began doing that, I also made a note to myself that being unhappy in dirty diapers was a potty training readiness cue. I bought her a new potty that looked like it offered back support and would be comfortable for her and easy for me to clean.

When I put the potty in our downstairs bathroom, I started to get nervous. I began to think about how and when I should truly begin trying to train her and whether potty training would be more difficult with her than with the older kids. Like everyone else, I've heard that children with Down syndrome tend train later than typical kids, and I've never trained a kid with Ds before. I didn't want to screw it up by starting before she was ready, or by being inconsistent. Chrystal wondered about this with her daughter, too (find that here).

We began to ask Bridget to just sit on the potty. The first time she did it, she said "tssss", stood up and clapped. Hmmm, I thought. A few weeks ago, Bridget took a tiny piece of tissue and was dabbing it on the front of her diaper (pretending to wipe). Again--earth to mom--time to start training her.

I found a Sesame Street Potty Book at Discount Drug Mart one day recently (you can also get it at Borders, or on Amazon) and couldn't decide if it was worth the $3, since Bridget still only watches Hi-5, and since some of it seemed difficult for her to understand. In the end, the coloring pages and stickers were too cute to pass up, and I thought it was worth a try (even later down the road).

I also considered whether I should offer her some type of sweet reward. Bridget doesn't really eat sweets, except for ice cream on occasion. She also wasn't chewing effectively (until recently), so I second-guessed giving her a treat as a reward. I ended up settling on mini-m&ms, which fit the bill on all accounts, and which I bought the same day I bought the book.

So I had supplies, but how would I do it? Put her in underwear, fill her with fluids and put her on the potty every 15 minutes like I did with everyone else? Let her pick out stickers to put on the potty each time she goes, and reward her with m&ms? Would Bridget be able to tell me she needed to go? Would she even care about rewards? With our older kids, the routine worked like a charm, and they all trained in a weekend. But what to expect with Miss Bridget?

I should know better. I should know not to assume that anything is beyond her comprehension, and that she is more like the rest of the kids than she is different.

I should also know by now to follow her lead. She leads well :).

I am planning on getting serious in a few weeks, when it is consistently warm and when can be home for several days in a row and just focus on potty training.

But, as you can see from the above photo, we've already started having success--and I have some answers to my initial questions. I taught her the signs for "potty" and "potty chair", which she is using proudly at this point after she goes. My goal is to help her understand when she needs to go and use one of these signs to alert me--she is already saying "poop" after she's gone, so she might also be able to express her needs verbally. We'll go with whatever works for her. (I'd rather she say or sign "potty" than shout "POOP!" when she needs to go, but that's my own hang-up :).)

She loves the stickers (she points to which one she wants, I take it off the page and she puts it on the potty). She loves the mini m&ms and is already asking for them after she goes by saying something that sounds more like "luh-muh-nuh-muh-nuh", but I know exactly what she means.

She's so excited about what she has produced that she looks into the potty and waves. She waits for me to dump the contents into the big toilet, and then she flushes it with a giggle. I have even caught her trying to wipe the potty clean with toilet paper (she's seen me using Clorox wipes on it a few times).

Her lesson is my lesson. With her, I should always presume competence. I should anticipate nothing other than to be surprised with what she accomplishes, when and how.