Our trip to Ukraine was a whirlwind and you can tell by the limited posts during our time there!
Though we didn't know it when we committed to adopt her, Alina's region is traditionally a very "fast" region.  We met her on a Monday and had court that same Friday.  We were at the orphanage for such a short time, and with two visits daily plus spotty internet connections, it was hard to post much on our blog.
So here's a re-cap (with additional details, pics and video) of the bulk of our visits with Alina (be forewarned...it is the motherload post on our adoption, with more information, pictures and video than any other post on either of our blogs!):
Day 2

We arrived to find Alina in the same green dress from the day before, but with new tights :).
(As an aside, Alina was always clean when we visited her, but she did wear that dress a majority of the time we were there.  It was their "good dress" for the groupa, and the zipper was broken and the inside layer was all torn up.  Someone had sewn two new--different--buttons to hold the dress closed at the top in the back.  That dress means the world to us. It is covered in memories of meeting our daughter and carries within it the significance of her life before that day.  So, we bought two new "dressy" dresses of the same size and asked if we could trade them for the green dress.  Her nannies let us take it home with us. It is the only thing we have from her childhood.)
Alina was happy to see us that second day.  She was still very reserved--and seemed unsure of what was going on and who we were--but was somewhat interested in us anyway and very interested in what we'd brought along (toys and yogurt).
We were not as ambivalent about her :).  She blew us away. 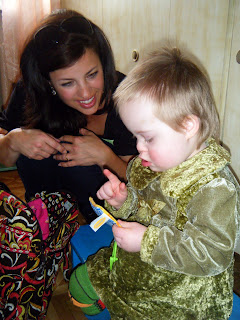 In love, in awe 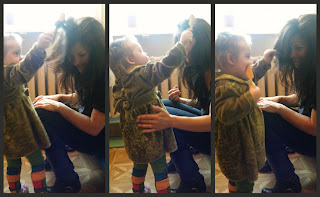 Alina, hairdresser
(She was very gentle & sweet, though my hair
did not look particularly great when she was done.) 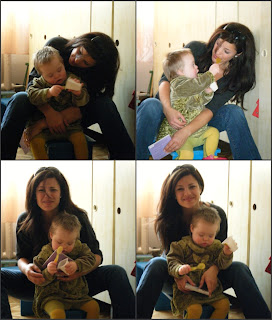 A sweet moment sitting with Alina
while she ate her yogurt...
until she turned and stuck the spoon in my mouth
without warning :).  I got over it :)!
Alina with empty yogurt container
Listen to Chris talking about her...
so much love already.
In all the excitement of packing up to go and see Alina after lunch that day, I left the memory card for my camera sitting in our laptop.  Chris took pictures and video with his Blackberry that afternoon, and that is what you see below:
Playing in the Music Room - afternoon of Day 2
(Please excuse me hiking up my jeans...
I haven't figured out how to edit my videos!) 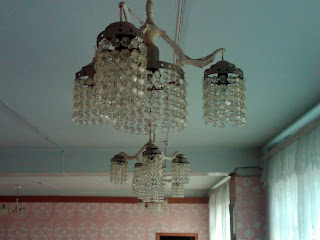 Light fixtures in Music Room
(We thought they were pretty!)
Day 3
Adoption blog posts with additional details:  morning visit, afternoon visit
Alina came out wearing...the same green dress :) on day 3.  Our morning visit was very relaxed.  We played, and then one of the nannies brought Alina's lunch out to the little table in the locker/hallway area.  We were thrilled to get to see her eat. 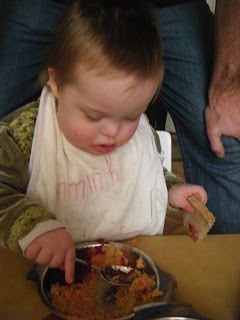 People have asked what she was eating in this series of pictures and video. Though it looks like cherry cobbler, it was actually chicken with apples and shredded, pickled beets. She also had a slice of whole grain bread, chicken broth and warm apple juice. All food was served warm at the orphanage, and the children eat with full-sized utensils. Alina's beverages were in an open metal cup (just a few ounces of liquid that she was expected to drink in a few gulps).

Here is video of one of Alina's nannies helping her to eat. This particular woman really enjoyed Alina and was very talkative with us. She knew just a small amount of English, but she really wanted to communicate with us. She gave us some very important information about Alina: "Alina clever. Alina messy." She couldn't have been more on target.
We laugh now, knowing her. We are sure some of her nannies miss her, but they are probably laughing, too ;).

We went outside during the afternoon visit that day, and had a special treat when some of the other kids from the groupa came into the locker room with us to get ready to go outside. The little girl in the gold coat in the video below is the one I referred to here:

The little girl who has the pair of shoes we brought is the most adorable little creature. I would scoop her up in a minute. She really likes Alina. She pats her cheeks and kisses her forehead as she says, "Lina!!" with a big smile. She looks out for Alina, too. When another child grabbed a book from Alina, she came over, took it and handed it back to Alina. She said, "no, Alina's" to the other child. It was so incredibly sweet. Chris and I were teary watching the interaction.

I have sent her picture to several people and have tried to find out her name, or anything about her...but have had no luck :(.  Tell me she is not the cutest.thing.ever.  (And don't worry, no children were harmed in the filming of this clip--even though I could not get a very tiny hat over one little girls large hair accessories!)...

Alina's groupa getting ready to go outside.
The little girl in the gold coat is the one
who took care of Alina.

Alina's friend
Day 4
We spent our morning visit outside on the playground.  We took Alina into one of the large metal play structures (a truck) and cuddled her in while we talked quietly.  She seemed sleepy and particularly content being close to us.  She had settled in substantially by this point in our visits...which is perfect, because we found out that afternoon that we'd be in court to make her officially ours the following day. 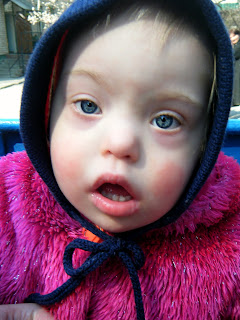 Our blue-eyed girl...
sleepy after snuggling with Daddy outside. 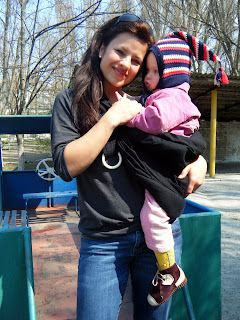 This picture is for Jodi and Faith ;).
Check out Alina's hat and tights under
the pants.  It was about 60 degrees that afternoon!
That afternoon we arrived to discover that we were loading up in a cab and going to get Alina's passport picture taken :).  She was quiet and held on to that large Evian bottle the whole time we were out.  We are not sure if she had been in a car before.  She was comforted by us, and was on her best behavior.  I am sure her little mind was racing.  She had no idea what to do in front of the camera, and the man taking the picture didn't try at all to get her to smile.  Her passport picture is hilarious.  It looks like something from Bill and Ted's Excellent Adventure.  The little sweater they'd dressed her in that day made her eyes look bluer than blue.  She was soft and squishy and sweet-smelling.  And look at how cute she was...

Other images from our time at Solnishko: 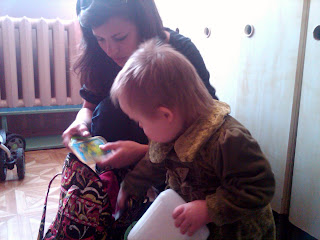 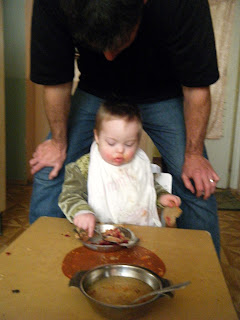 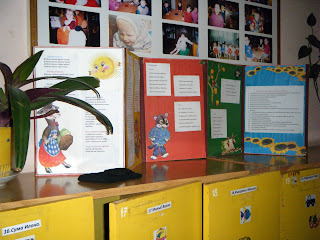 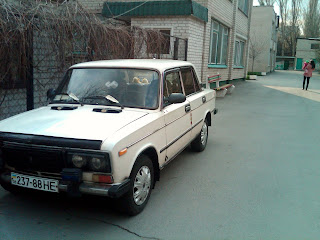 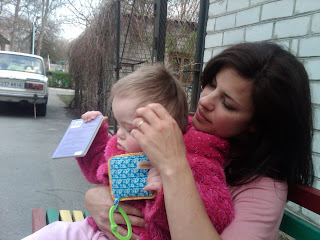 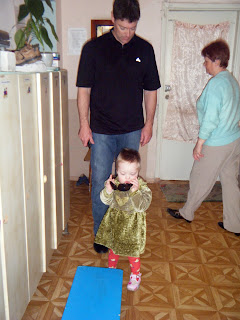 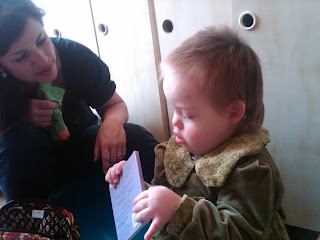 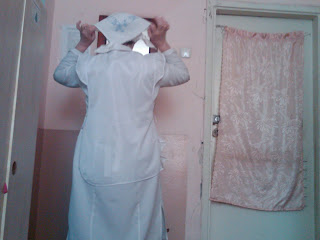 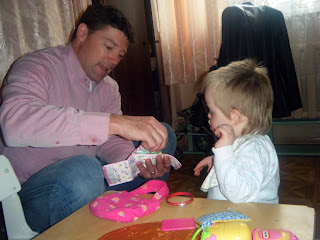